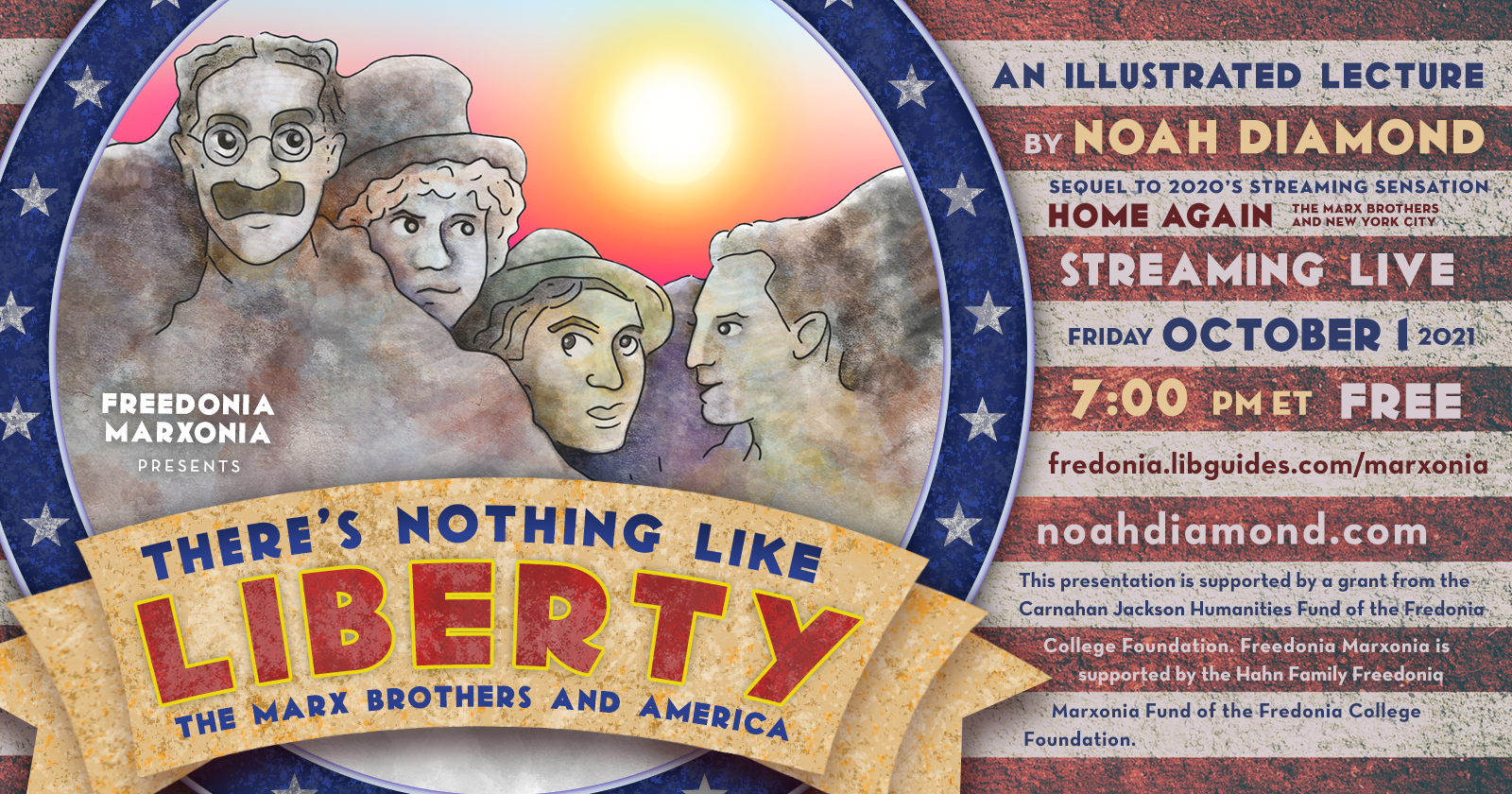 There is also a small display in Reed Library (up from September 28 to October 17) featuring submissions to the annual art contest.
Contact Cindy Yochym at Cynthia.Yochym@fredonia.edu for information.

The Marx Brothers across the U.S.

The Marx Brothers' hometown was New York  City, but their careers took them throughout the U.S.  They performed in venues across the country and made movies in Hollywood.  Their residences included Chicago and cities in southern California.   There's Nothing Like Liberty: The Marx Brothers and America continues to look at the Marx Brothers' history by examining their experience across America.

More info about There's Nothing Like Liberty: The Marx Brothers and America

An article from BroadwayWorld.com.

You can continue to watch the video on YouTube or here:

Noah Diamond was one of the organizers of New York City's 2014 Marxfest; the creative force behind bringing the Marx Brothers' 1924 musical I'll Say She Is to the Off-Broadway stage in 2016; and writer and performer of 400 Years in Manhattan, an award-winning show at the 2019 United Solo Theatre Festival in New York City. In 2020, he and Amanda Sisk wrote and produced Quarantigone, an online adaption of Sophocles’ Antigone.  He is currently a co-host of the Marx Brothers Council Podcast.

Noah is the author of Gimme a Thrill: The Story of I'll Say She Is, The Lost Marx Brothers Musical, and How It Was Found; Love Marches On; and 400 Years in Manhattan.

Support for this program

Noah Diamond's presentation is supported by a grant from the Carnahan Jackson Humanities Fund  and the Hahn Family Freedonia Marxonia Fund, both of the Fredonia College Foundation.

For the third year, Fredonia 's Founders Day is partnering with Freedonia Marxonia. Founders Day was initiated in 2017 to foster appreciation of the legacy of the village residents whose vision and significant financial backing helped establish a Normal School in Fredonia in 1867. See the virtual exhibit about the founding of the university, curated by Amanda Shepp and Pat Cummings-Witter of Reed Library’s Special Collections & Archives Division.